A Day in the Life

The fascinating adventures of a female house mouse

We're going to be seeing a lot of mice this winter. This article from Techletter provides an interesting insight into why.

As the day ends, our mouse, a 6-month old female, which in mouse years is late middle age, slowly wakes from her afternoon sleep and stretches in her nest. Her stretch wakes her five surviving young from a litter of six two weeks ago. She touches them and smells them, checking their condition.
Her young will soon be weaned, and they’ll be completely independent in another two weeks. They will have to be. Their mother is already pregnant with her next litter and has been since two days after their birth. In another week, she’ll have her next litter, and space will be at a premium. Besides, by the time they are two months old, her offspring will be having litters of their own. 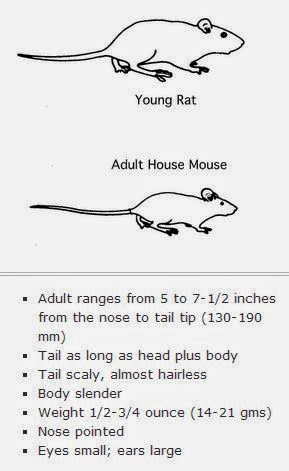 Our mouse squeezes through a hole no bigger than a quarter, escaping at last the wall void where she's waited most of the day. She freezes for a second or two. Any danger? Like all mice, she's near-sighted. Her dark, hyperthyroid eyes see little; but her quivering nostrils and fanlike ears tell her "all clear." She begins the first of many identical circuits of her territory that she'll make that evening. She darts from place to place, relying more on her "kinesthetic" sense...a subconscious recording of a series of muscle movements...than on her eyes, ears, and nose.


Turn right. Run twenty paces. Stop. Turn left. Run ten paces. Scramble up a pallet. Dart five paces to torn sack of wheat. Nibble. Turn left. One, two, three, climb up stacked boxes. Pause. Nibble on some spilled oatmeal. Turn right. Run eight paces. Put left whiskers on edge of case of oatmeal and run five paces.............Wait a minute! No case of oatmeal!
A box moved is a crisis for a mouse. Her universe has changed; life has become much more complicated. Our mouse immediately stops her normal activity. Over the next hour she slowly re-explores her territory, investigating every object, new or old. She re-establishes safe movement routes and reprograms her muscle memories so that she can once again dart from place to place.

Comfortable with her surroundings once again, our mouse resumes her territorial circuit and feeding routine. But she's not alone now. Working her territory she smells a male mouse. She searches. Spots him. Within 16cm, our mouse knows by smell that this is a stranger, not family. Hurling all 20 grams of herself at the invader, she drives him away with continuous violent attacks.
While not as aggressive as a male mouse, our female mouse is not the timid, colourless, "mousy" creature of cartoons. She is an aggressive protector of her territory and social status.

Our mouse's family group, an alpha male (the dominant male), another breeding female, twelve daughters and four sons...forms a "colony", that all members defend fiercely.

The territory of our mouse's family group, like most, is surprisingly small, extending from a nest site in the wall void, out through a gnawed hole to a food storage pallet, across two feet of floor to a few stacked food boxes, up onto a series of food storage shelves, into the wall through a pipe run, and back down to the nest site. As with most mice, ours travels mostly within 3m of her nest. Mice seldom establish territories that extend beyond 10m.

Our mouse family once included six other sons. As usual in mouse families, these six had been driven away by the dominant male as they matured and began to compete for mating rights. This natural dispersion of males into new nesting and feeding sites (niches), combined with fast population growth that overloads resources, are the reasons that mice spread so quickly through a building.

Back to our mouse. After successfully chasing away the stranger, she resumes her territorial circuit. She nibbles on different foods throughout the evening, usually eating 20 or more times, but eating very little at most stops. She does have a favourite feeding site where she eats more than usual; under a bottom shelf where grain and bird seed have spilled.

House mice are tough and adaptable. Smithsonian magazine once reported on a barrel of biscuits which had been sealed in Aberdeen, Scotland and opened in the Canadian Arctic l4-months later. Out popped a live mouse! Mice have been found at the bottom of English coal mines and 15,000 feet up in the Andes, in coastal deserts of South America and on an island near Antarctica, even nesting in meat lockers in temperatures 5-10 degrees below zero. There's nothing "mousy" about mice.